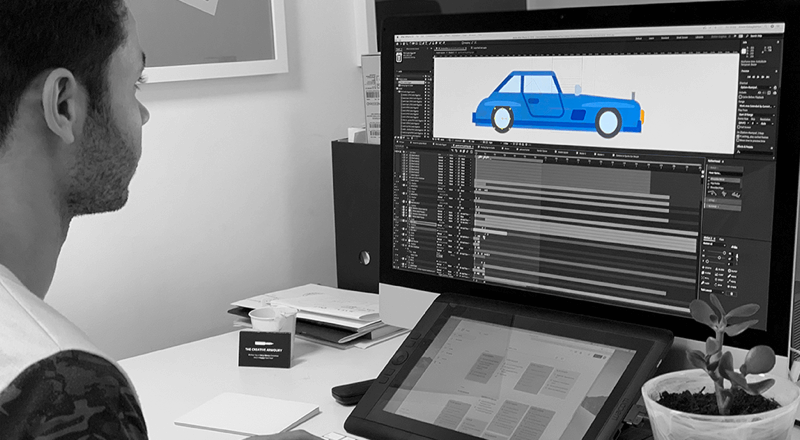 Motion Designer Alwin Ediagbonya joined The Creative Armoury team in 2018. Having studied animation at Norwich University of the Arts, he's drawn to the discipline’s versatility, seeing it as a bridge between reality and infinite possibilities; no two projects are the same thematically or stylistically. In this article, he takes a look at some of the top animation trends of 2019‍

Just as the landscape of motion graphics seems to settle, we’re once more presented with exciting new takes on the medium. 2019 has seen an assortment of new animation trends so far. We thought it would be apt to take a look at what’s emerged this year - and what's likely to be sticking around for a while.

As technology has continuously developed and become more accessible, motion graphics as a whole has become more exuberant. There have been clever spins on the medium, which are more complex than just adding movement to some shapes and text. Simply look at an ad, and you‘ll see that anything (and often everything) is dynamic, with a bunch of flourishes that were not nearly as prevalent even a decade ago.

Motion graphics are about guiding the audience through a clear and comprehensive narrative. Therefore it doesn’t come as a surprise that smooth transitions and morphing between scenes and objects has become increasingly popular, it's set to continue this year. Some of these transitions are so cleverly done that by the end you don’t know how you went from A to B, yet somehow you’ve retained most of that information, much like a dream. These transitions create a new level of seamless and captivating movement. ‍

Catering To The User Experience‍

For designers, user experience has become synonymous with animation. Animation on phones adds a new dimension: Interactivity. It becomes a direct portal into your game or app, and the slightest movement is essential to guiding users through a journey. Animation can also make your product look attractive, and app and game developers have caught on. Tap on an app icon, you zoom into it; have a multi-column menu and swipe between each. The idea isn’t particularly new, but in the last couple of months, we’ve seen more visually informative and playful takes on this functionality. We now see buttons morph to highlight your next actions, or content being pushed away as you view a post in greater detail. Not only are these nice touches, but they can make the user journey more fun. It gives users more control and takes them to where they want to be a lot faster.‍

(a.k.a blobs and other fun, weird shapes)

It doesn’t feel like long ago that we saw the polarising advent of iOS 7 and the flat, minimalist look it brought with it. Over the years we have seen every company adopting this design language to fit within this flat style to a tee, but now it looks like designers are eager to break away from the perfect squares and circles and take a little cue from Mother Nature.

We’ve seen an exponential increase in the use of blobs and asymmetrical rectangles to contrast with the conformities of our little black mirrors (our phones - for those of you who don’t watch the show).

We’ve seen an exponential increase in the use of blobs

The abstract form of a blob means that it has a wide range of uses. It can be good for framing, introducing a nice splash of colour to brighten up animations, but also for taking on the resemblance of other shapes. Blobs are turning into fauna, clouds, pools, etc.

The blobs saw a huge spike in usage back in 2017, but now they feel much more considered and used for an actual purpose, rather than giving the impression the designer/animator went: “Blobs are cool, lemme chuck some in there just for good measure”.

Obviously, you can’t just apply a current trend to create a successful animation instantly. It needs to be applied in a considered way, so it facilitates your story. In that sense, it can have a tremendous, positive influence over how people interact with your company, brand or product.

When working with Pikl - a company specialising in insurance for the sharing economy - we devised a route that involved morphing between objects. In doing so, it mirrored the respective branches of Pikl’s business and demonstrated the wide range of insurance products they provide.

The metamorphosis acted as the perfect device for memorably showing each object, while highlighting the lighter, more contemporary style of their rebrand. In all, many of these trends come across as an evolution of the styles of yesteryear.

We have surpassed the time where animations were implemented as something of an afterthought, or at the most, a subsidiary. Now, they are visibly, tightly integrated into the production process, becoming more prevalent as a strong marketing tool and the industry is becoming more exciting because of it.

Get in touch to learn more on how we use animation in elevating brands to the next level.