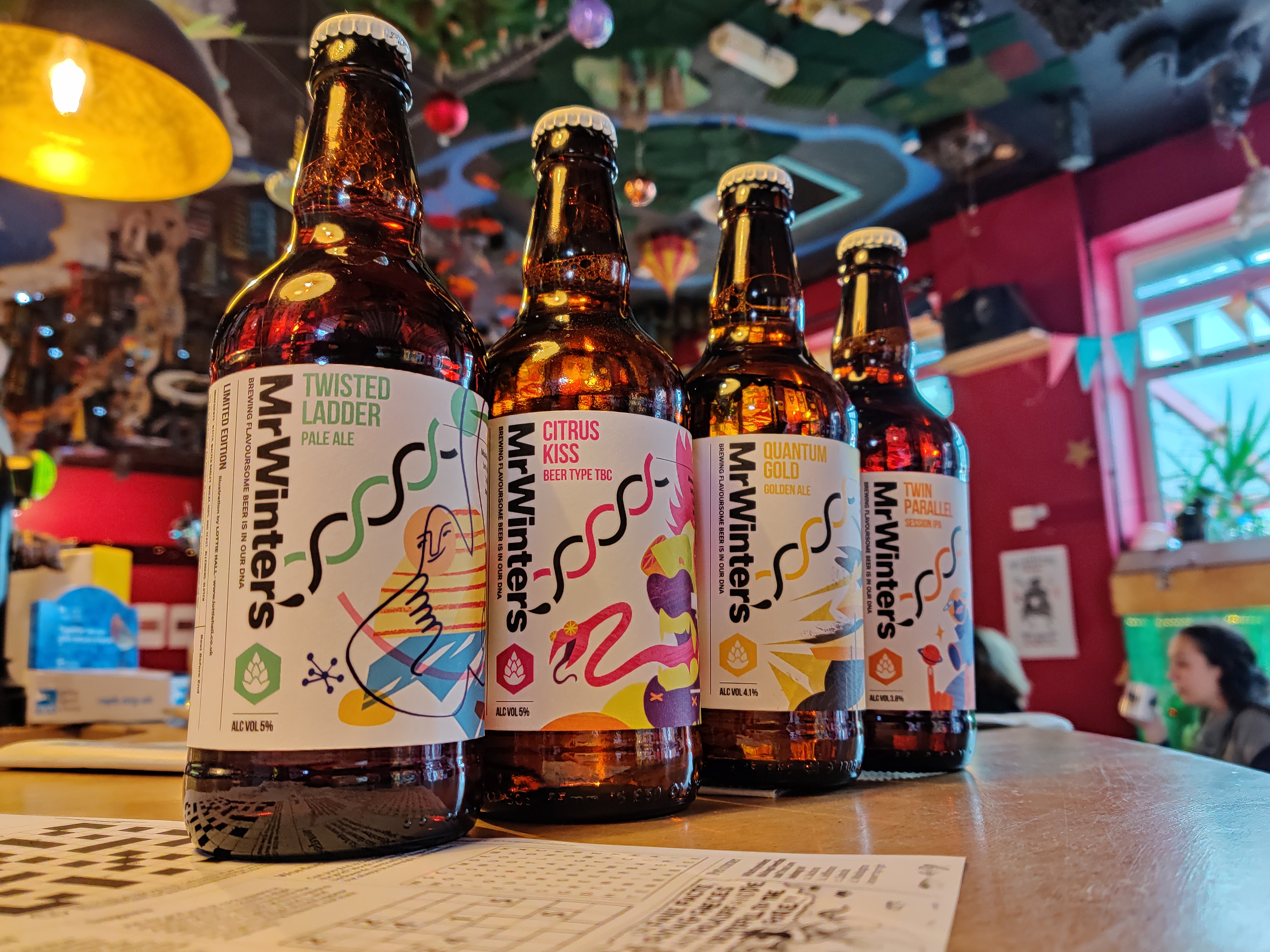 Branding- It's in The Armoury’s DNA.

Which is why we were thrilled to work on such a fantastic project developing a fresh brand identity for local Norwich based brewery Mr Winter’s beer, who specialise in bespoke and unexpected craft beer flavours that are available in pubs and restaurants throughout Norfolk. The family-run micro-brewery has been producing distinctive craft ales since 2001, boasting an award-winning product range including a Bronze CAMRA Champion Beer of Britain Award.

The Armoury was challenged to create a memorable and distinctive identity for the company that reflected the quality and artisan nature of its products, to exist across an extensive project scope including pump clips, beer mats, bottles. Delving into the history of the family owned brand, which was recently passed from father to son current Director Mark Winters; The Armoury wished to echo these organic roots within the branding, creating designs surrounding the strong Brewers DNA within the business's heritage. Commenting on the design process, Creative director Lee Turner states:

“In an ever increasing and competitive marketplace brand differentiation as we know is vital for businesses, especially in the world of craft beer. However, when presented with an opportunity to completely redefine an established brand, it was important to behave cautiously and with a heightened sense of responsibly. So, with a deep routed concept in mind we built upon the family name and made the key innovator and master brewer the star of the show. With an ambitious and overtly experimentally approach to craft beer, we were keen to capitalise on this as a theme and establish a direction that was more aligned with the likes of Jekyll and Hyde and other similar archetypal eccentric scientists. With experimentation and genetic talent at its heart, we created the DNA monogram to serve as the brands shorthand and then established a broad creative landscape to accommodate the growth of its rapidly expanding and diverse product range.”

To take the brand to the next level, The Armoury also worked alongside 4 very talented creatives from Norwich University of the arts, who illustrated the companies limited edition range.

“As I'm a former NUA graduate I’m passionate about supporting the students in the first steps of their careers. Certainly, when I graduated (a long time now!) it’s quite a daunting process to transition from the student to the professional creative space. We gave the team real world briefings and structured the process in the same fashion as we engage our other illustrator suppliers. The guys did great!”

Well what can we say, MrWinter’s is finally here and we absolutely love it! The new name…new image…new beers… Just WOW! Its fresh, modern and something totally different from what Winter’s once was. It’s very exiting to see where MrWinter’s will take us.

It’s been a long road to get to where we are now but we couldn’t have done it without the hard work, enthusiasm, patience and creative spur that everyone at The Armoury exudes. Who knows what MrWinter’s future holds so watch this space!

The Armoury is very much looking forward to seeing this exciting product range hit the shelves and for new releases in the near future.

Take a look at some of our case studies to find out more about how we have created a range of creative branding for breweries: https://www.thearmoury.agency/project/projects-overview